Ever since Amnesia: The Dark Descent struck a cord with horror game fans, we’ve seen no end of first-person hiders: horror games where you’re incapable of fighting back against whatever baddies are after you. It was actually kind of surprising when I discovered that the character in Resident Evil VII was not only armed, but expected to fight plenty of times throughout the game. The value of ratcheting up tension by disarming the player is clear, though, and sometimes you’ve got games like Perception that up the ante just a tiny bit more.

When Cassie finds herself having recurring dreams about a mysterious house, she does some research and discovers that the very house in question can be found in Massachusetts. She heads up to check it out and, presumably, to have some chowdah, but several issues arise: first, the house doesn’t appear to have anyone living there. Second, not having anyone “living” there doesn’t mean it’s empty. Third, Cassie came by herself, which is always a great idea when you’re going into a house that’s pretty clearly haunted. Fourth, and this is perhaps the most relevant circumstance at hand: Cassie’s blind.

This is a first-person horror game where you play a character without her sense of sight. That doesn’t mean Cassie is helpless, though; in Daredevil fashion, Cassie compensates for her lack of sight with exceptional hearing. This means that your visual perception of Perception’s world is shaped by sound. Typical sound effects like footsteps and doors opening will produce a “visible” radius that allows you to work out what’s immediately around you as you walk and where activity is coming from. You can also get a better idea of what’s in a room by having Cassie tap her cane, producing a sharp sound that will “illuminate” entire areas at once.

This results in an interesting juxtaposition of gameplay; bereft of its unique conceit, Perception is actually a fairly standard horror adventure. If you could see what you were doing at all times instead of relying on echolocation, the game might not be quite so compelling, as you end up doing the usual routine of going around rooms, listening to audio logs, collecting and using keys to open doors, and every so often fleeing and hiding from monsters. As with many horror games since Amnesia: The Dark Descent started the trend, there is no combat in Perception. On the other hand, while Cassie can be killed, you’ll rarely lose much progress when this happens, and the game as a whole can be finished in about three hours.

Given the fact that this is a game revolving around viewing the world in a unique way, it’s little surprise that Perception is, well, visually striking. You may be unsurprised to hear that there are very few problems with textures, for instance, as the majority of objects aren’t really textured at all. Meanwhile, the environment design is interesting enough, though I’d have preferred that the game throw you into the deep end a little more with regards to exploration as much of the early portion has you being lead around directly.

It’s a fairly short game and, as mentioned, it doesn’t do much you haven’t seen before outside of Cassie being blind. Still, Perception grew on me. I think my favorite part of this one, really, might be that aside from a blurb that follows the ending the game is largely unobtrusive with its message. Your character is blind, but she’s just as capable of surviving (or failing to survive) the experience as anyone else; it’s a footnote to the story rather than the plot. Perception, unlike many contemporary games, doesn’t offer any apologies, nor does it brazenly place itself on a pedestal for presenting this unique take on viewing the world, and it’s all the better as a result. 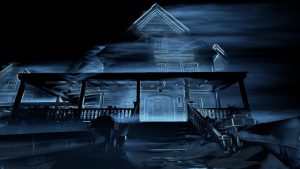 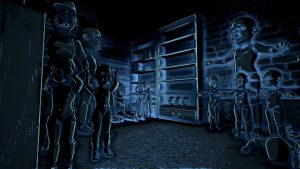