The rich history behind Nintendo and its products is still new to me, and I’m still discovering just how many bizarre and innovative (sometimes both at once) ideas they’ve dreamt up for the gaming market. With the introduction of Labo, a cardboard platform for the Switch that lets users create a host of gaming accessories, controllers, robots, instruments and more with, well, cardboard! That and maybe a little Scotch tape and glue.

The timing was fortuitous; the Labo was introduced at a time when I was already spending an unhealthy amount of time watching YouTube videos and learning to make origami animals. That a gaming accessory would conceivably combine similar skills to create three-dimensional moving parts to interact with just sounded like the next logical step.

Before I launch into my thoughts about Labo I wanted to share a piece of interesting – and still totally relevant – history concerning Nintendo’s history with paper. The company best known for Mario, Zelda, and Donkey Kong didn’t actually start to specialize in the video game market until 1977, but for the first half of the decade they were still producing products for the toy and game business.

One of these ideas were papercraft models, where from just a few sheets of paper – and some folding skill – people could make animals, buildings, ships, and elaborate panoramic views. Lucky for Nintendo, they already had in-house printing presses from their days manufacturing playing cards (hanafuda) so they were well-positioned to produce these models. Glancing at the various Labo pieces scattered across my workstation, it’s easy to see Nintendo is embracing its quirky past while charting a future that’s anything but predictable.

The core of Labo is all about building. Currently, there are two Labo kits available; this review is based on the Variety Kit (Toy-Con 01) containing the RC car, fishing rod, piano, motorbike, house and included game/software to play with each of the assembled products. There’s also the Robot Kit (Toy-Con 02) that’s full of, well, robots! Either requires hours to properly put together, and constructing cardboard pieces into fully interactive accessories and toys is an experience that really should be shared, and it’s not difficult to imagine parents and their kids really getting the most from Labo.

Fortunately, I had an impossibly helpful friend at the ready to aid me along the way. Thankfully, the Labo includes software that plays on the Switch, offering in-depth, onscreen instructions to build each piece,helping to guide you through the process. There are full 3D models of each cardboard piece you’re working with and you’re able to move the camera around to zoom in/out to get a better angle. We eventually developed a rhythm where one of us would play the instructions while the other folded and connected cardboard pieces, pausing or rewinding as needed if a step got skipped.

We didn’t end up using this feature all that much, but it was helpful being able to focus on a fold from a different angle when we didn’t understand a step. But even these moments were rare, as the actual folding and construction was surprisingly intuitive. It was a breeze to put together even more complicated pieces like the piano, watching it slowly come together over a few hours.

Putting together our Labo kit took up the better part of an entire weekend, but we were taking our time to enjoy the experience instead of rushing through. Much of this was done in complete silence as we focused on building while occasionally asking each other to rewind the instructions, completely focused on the task at hand and barely noticing the time flying by; the first night constructing the Labo had us building until two o’clock in the morning. Hey, who needs sleep? 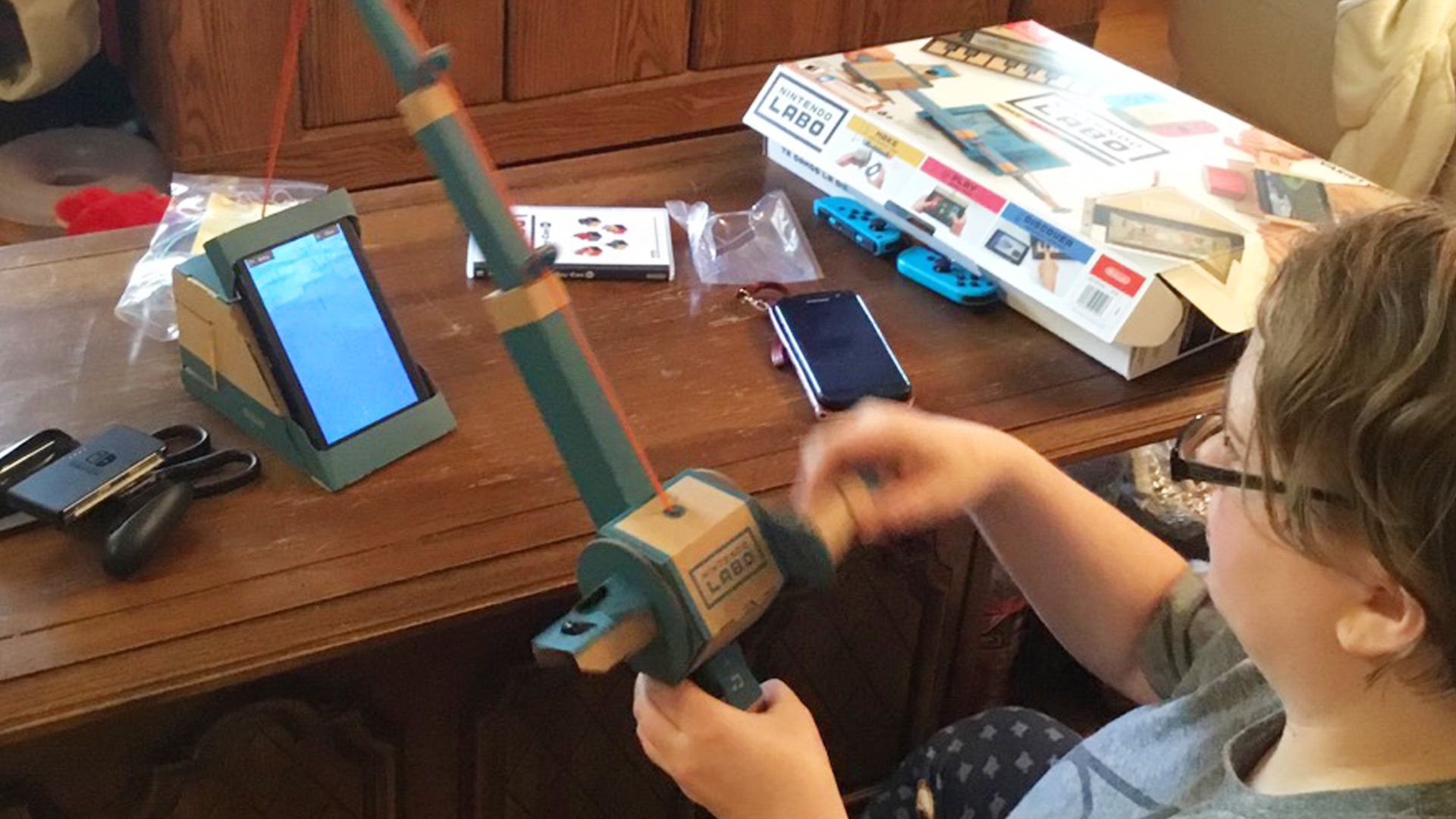 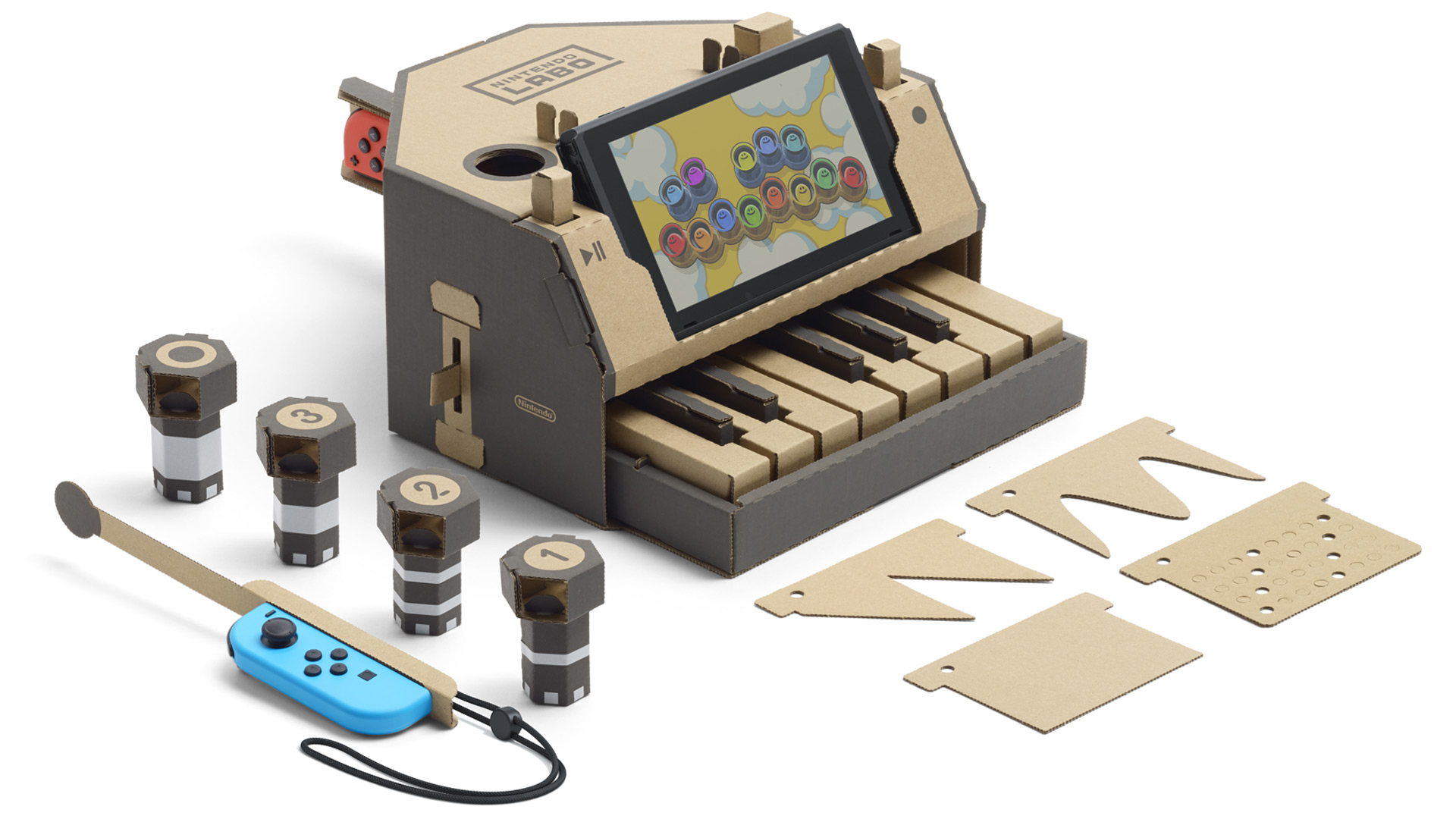 There were aspects to building with the cardboard designs I found impressive. Others were less so, making me wish there was a fully fleshed out game behind the cardboard toy. For example, the playhouse makes use of the infrared cameras on the Joy-Cons to read special marker stickers that are placed on knobs and detect movement. When putting a knob into the house a new minigame would pop up to play with this small, ball-like creature riding through a cart in a mineshaft or running on a wheel to earn jellybeans. Combining different knobs on the sides and bottom of the house unlocks new rooms and games, so it’s a constant rotation of experimenting with each piece.

Other than feeding jellybeans to the little “pet” in the house and watching it change colors, you don’t actually interact with it much. You can shake the house around and watch chaos ensue, but otherwise you aren’t tasked with anything like cleaning up after it or playing with it. The minigames were fun, but felt like they ended way too fast just when you started to get into them.

No question, our favorite Labo minigame involved using the fishing rod, which quickly became my personal favorite of the Variety Kit. You have a spool of string that connects into a box located behind where the Switch is mounted to give it a three-dimensional feel. One Joy-Con connects to the bottom of the pole and the second connects to the handle so both controllers are detecting movement when “fishing” on the Switch. When you turn the handle on the fishing pole there’s a satisfying “click, click, click” when turning the handle which felt like there was real weight behind each movement.

On the Switch screen you’re shown the line and hook of your fishing pole and must jerk up quickly to ‘catch’ the digital fish on a line before reeling it to the surface. I never got the hang of catching fish in the deeper waters since my line would always snap, but you have to move the pole back in forth to ease the stress on the fishing line to keep it from snapping.

We also played around with the motorbike and the piano, but neither felt like they used the included software fully. You’re able to create your own music with the piano and use a Joy-Con to conduct music and there’s a studio mode where you can switch between different notes and play modes to create nearly anything you want. While I didn’t make anything noteworthy, I did like playing with the keys and tapping out catchy tunes. Honestly, it would’ve been nice, and definitely more educational, had there been even a brief tutorial on how to play the piano or even quick lessons on basic songs.

Still, if you’re musically inclined or feel like experimenting, to its credit the Labo does give you an entire studio of sorts to play around with from singing cats to musical chimes to make your ears happy. It’s not quite the return of Mario Paint’s famous composer, but it’s definitely much better than Wii Music ever was.

While there were some like the playhouse I ended up ignoring all together the other toys like the little RC car that creatively use Joy-Cons built-in motors to move around were fun. I also discovered the controllers had night vision, which means the RC car has further potential as a spy device…not that I’m suggesting that. Well, maybe a little spying.

This is pure speculation on my part, but I’d love to see fully-featured games focused around using Labo accessories in actual games much like Nintendo does with their amiibo figures. I’m not inclined towards fishing games, but the cardboard fishing rod felt more intuitive and real than a standard game controller ever could, especially when reeling in the poor struggling fish. It just felt more satisfying, and kept me playing long past the point I would’ve otherwise quit had I not been using something that appropriated the real thing.

I feel that, if properly utilized, Labo accessories could give games entirely new dimensions that could re-define how people interact with common genres as they give them something real and tactile to hold on and play with. Yes, we already did see something very similar with the original Wii console and its myriad of plastic accessories, but most of these were single-use only.

The cardboard is made well, but I did encounter a few minor setbacks like marker stickers that had been folded over on the knobs for the piano starting to peel off. I remedied this using clear tape to hold them in place so the Joy-Cons could still read them. Another example is when the connection points on the fishing rod handle started to come loose; I used a few drops of glue to reinforce them, but this does bring into question the longevity of these cardboard toys. Spilling a drink on them pretty much ends all the fun so it’s probably a good idea to invest in a large waterproof container to store them in when not in use.

On the flip side, Labo cardboard is entirely recyclable so when you do get done playing with it and don’t feel like keeping scraps of used materials around the house, it’s easy to ecologically dispose of (or re-gift, if you’re that type of person). 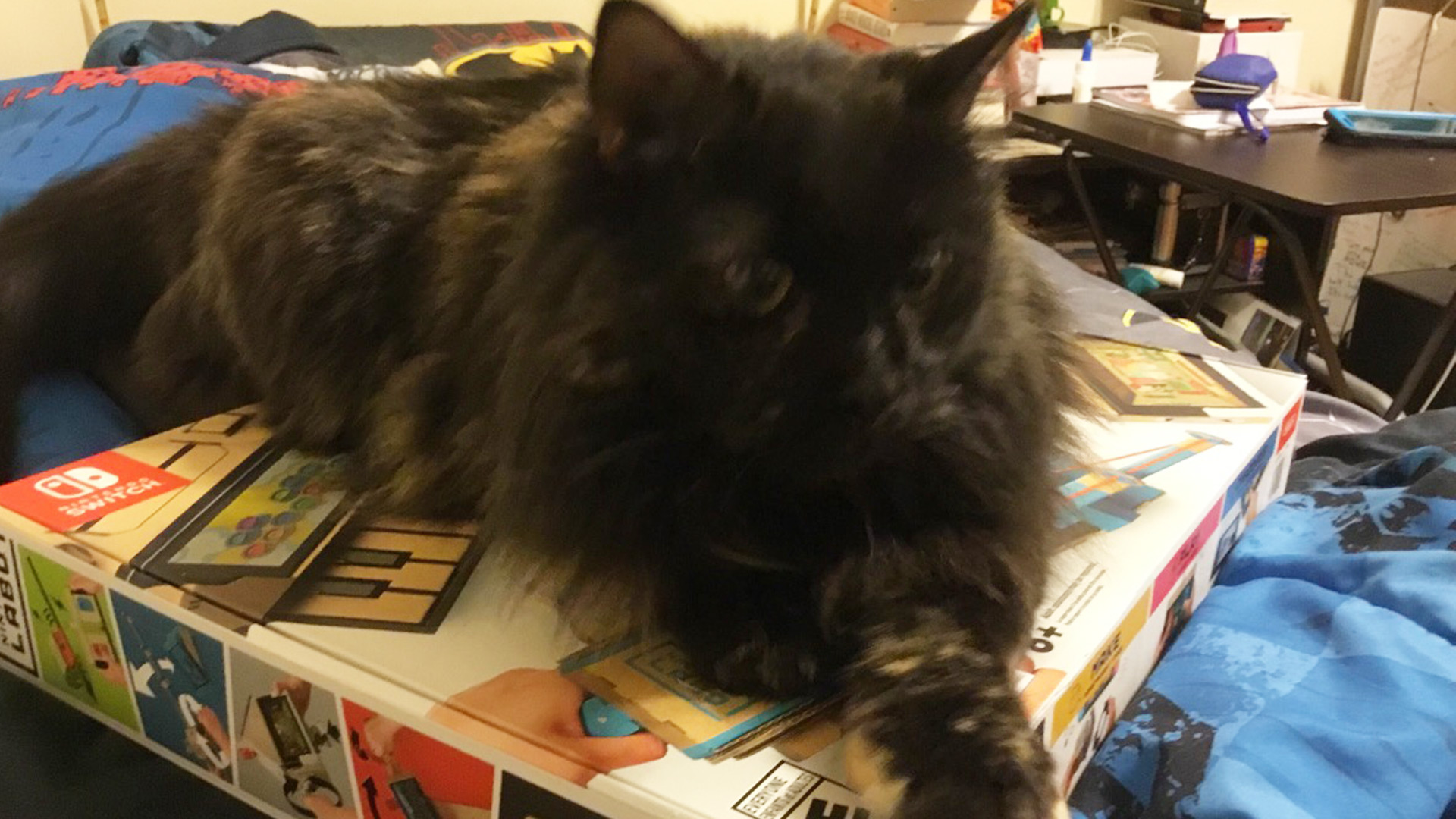 Nintendo’s Labo is a creative-oriented virtual and physical toy chest that really pushes you to use your imagination when building and playing with videogames like never before. I now have a bag of cardboard toys scattered across my desk just waiting to be played with again – and survive curious cats. It’s also a glimpse at what the Switch is capable of, assuming developers are willing to take advantage of the surprising possibilities of cardboard accessories. While I’m on the fence about purchasing further Labo kits for myself, perhaps Nintendo will take their latest platform initiative to the next level with software and games that unleash the power of cardboard. 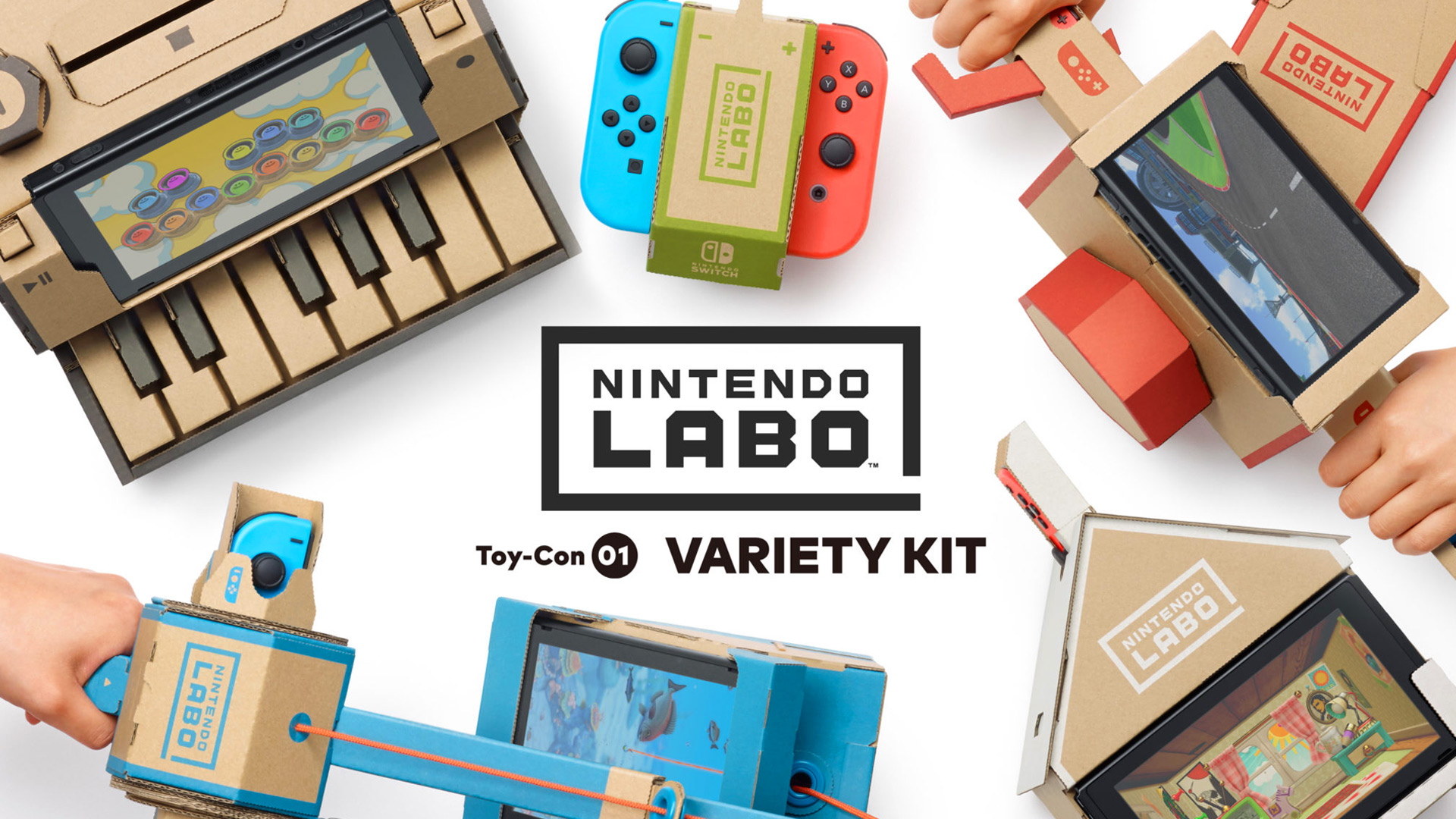 Kirby and the Forgotten Land