The Touhou Project is, admittedly, something I hadn’t really heard of before this year. If you’re like me and have no idea what such an adorable sounding thing could be, here’s the details: it’s a series of games that’s been going strong for over twenty years, with an impressive amount of games in its library. So impressive, in fact, it earned a Guinness Record back in 2010 for being the “most prolific fan-made shooter series.” Originally starting out as a game in the bullet-hell genre, Touhou Project games tend to dabble in nearly every genre while also sticking with the core universe built by solo developer Team Shanghai Alice way back when in 1995.

This time around, Gensokyo Defenders takes the series into the tower defense genre with an effort that automatically feels unoriginal and outdated, even by the forgiving standards of the genre.

I’m typically much more of a passive tower defense player. I like to plop my towers down and let it all happen. My army should work for me, proving their effectiveness by allowing themselves to follow my orders, without question, to ensure their task has been met. Active tower defense games have you running alongside and down in the trenches with your subordinates. While every good captain stays fast with his soldiers, this often leads to times where you’re far more powerful than any trap or ally you can release on your enemies.

Now there’ve been plenty of tower defense games with more active elements, such as Sanctum, Orcs Must Die and even Gears of War’s Horde Mode, but I’ve never really connected with any of these. They remove the crucial puzzle aspect of the genre by allowing you to correct your mistakes by running ahead and killing those enemies clever enough to slip past your defenses. The puzzle aspect of allowing to plot and plan before each wave is a testament in how well you’re able to create efficient choke points and stop everyone dead in their tracks.

Gensokyo Defenders doesn’t do much in the way of blending these two (active and passive) subgenres, almost using the tower defense genre in a slightly inconsequential manner. While you’re given tilesets to slow, spike, fling and shoot enemies, they always feel more like bumps in the road opposed to helpful allies. I found myself placing traps haphazardly in sections where I felt enemies would pass through, knowing full well I’d be forced to gun them down anyway. You can upgrade your various towers, of course, they all seem like subtle improvements that add small buffs to already weak towers.

Alongside your peashooter, the player is given some specials which can be activated by double tapping on the arrow buttons. These can be helpful for certain instances of being overrun and offer some choice between what you can use to attack and more importantly, it gives you a break in the monotony of running around watching your character whittle down enemies. There are multiple characters, all with different weapons and skills, but none of them are particularly interesting or stand out.

One big area that distinguished Touhou games is its familiar anime-style characters, usually of the buxom, wildly dressed variety. Even in this area Gensokyo Defenders fails to stand out. The story and presentation are incredibly lackluster and as by-the-numbers as you can get, which is a shame as I found these colorful characters otherwise charming. The controls and mechanics are serviceable for what they’re trying to achieve, but everything feels drawn out, and not in the thoughtful way tower defense games typically are.

My only other experience with a Touhou Project game was this year’s Azure Reflections, which showcased the series’ unique charm without feeling cliche. Not only is Gensokyo Defenders devoid of a charming story or characters, it’s presentation leaves much to be desired. From the UI to the graphics, nothing feels fresh or new. Visually, there’s misaligned font, muddy textures and drab colors all over the game; the game is simply unattractive. The only slight bit of charm comes from the design of the characters themselves but, as I’ve said, even these lack depth as the writing is entirely without merit.

One gripe about the Switch version of the game: occasionally, I found myself needing to take a break from the game to do real life things, and put the game in sleep mode. But when I would return to play about an hour or so later, the game had locked up on me. This isn’t unheard of and the first time it happened, I just let it sit until it finally caught up and resumed. But when it happened a second time – and then a third – I felt a little perplexed and realized the game just wasn’t optimized to be set in sleep mode. Which seems like a huge oversight as a game like this benefits greatly on a mobile platform like the Switch.

Gensokyo Defenders has a good chunk of levels that have different settings but are mostly the same in design. With different difficulties and the ability to change your loadouts, there’s a lot of replayability if you like the core game – even though the map layouts tend to feel familiar from one another. Once you get through the story missions, you’re given the option to play online, though good luck finding matches. There were days when I wasn’t able to find any matches in any of the available servers, despite desperately wanting to extend my conquest online. It’s a big bummer because I can see multiplayer adding just enough of a challenge to the game to make it a tad bit more interesting while also expanding the life of the game.

Overall, it’s truly hard to recommend a tower defense as lifeless as Gensokyo Defenders. I realize these may be harsh words, but it’s hard to understand how a basic core concept like a tower defense game can be stripped down to make something unexciting and unoriginal. There are plenty of better games out there that have towers and defenses, despite not having the colorful Touhou license. Go seek those out instead and leave this one alone. 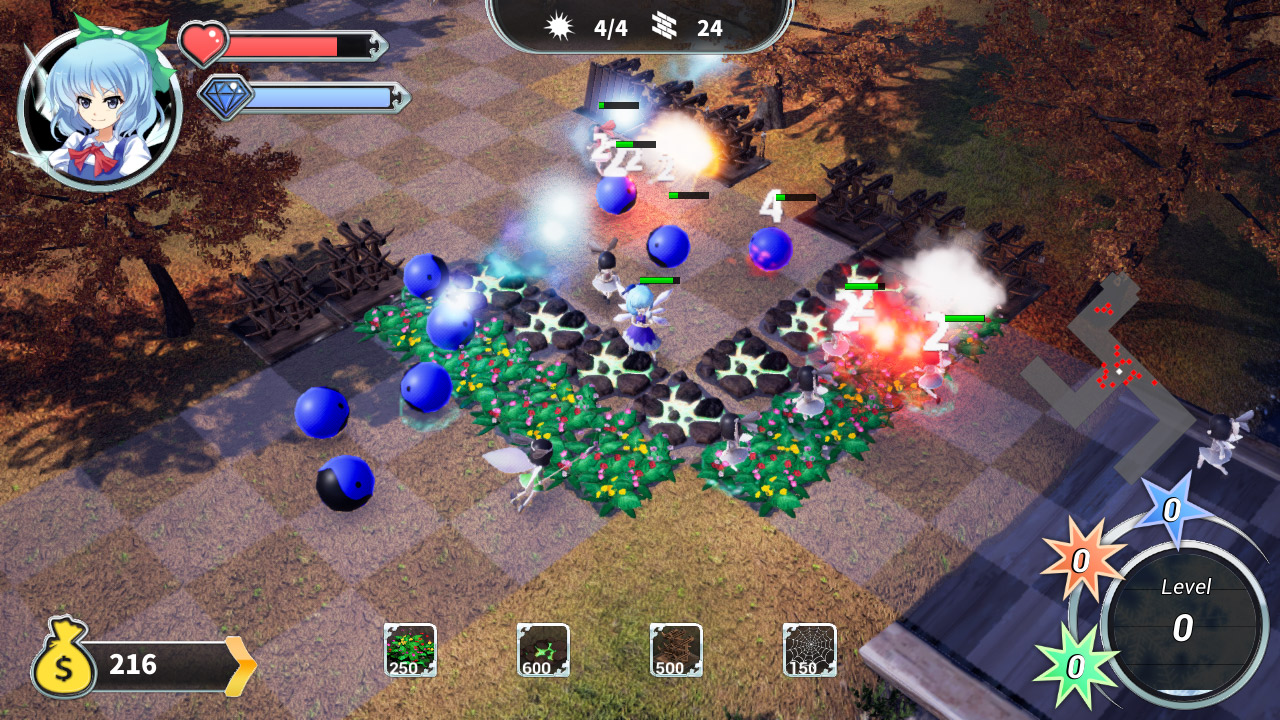 About the Author: James McKeever

Popzara welcomes guest reviews, editorials, and other fascinating pieces of original content. Think you have what it takes to join the fun? Contact us and find out today!
Social:
Advertisement