Rhythm games used to be quite the institution back in the day! You had your Rock Band, your Guitar Hero, your Band Hero, your DJ Hero…really, any given retail shop you checked out was bound to be stocked to the brim with plastic instruments. Those days have come and gone, though. These days, rhythm games are somewhat less common outside of series like Just Dance, and an effort at bringing them back a few years back flopped spectacularly. Maybe something like Gal Metal that injects a little innovation into the mix is what the genre needs.

Aliens are coming! You’ve got to stop the invasion! There’s a few issues, though. First, you’ve already been abducted. Second, part of that abduction was getting stuffed into someone else’s body. Finally, the only way to stop the aliens is through the power of music. While she’s a pretty decent musician, you’re not quite as talented. It’s good, then, that your host is able to help you become a better drummer even if you’ve got control of her body – especially because if you don’t get your rhythm on, Earth’s going to have some serious alien trouble sooner rather than later. Best get into that groove!

So Gal Metal is a rhythm game, right? Well, technically, sure. It’s different from pretty much every other rhythm game out there, though, because you don’t actually have a note track or anything like that to follow. Your job is to play percussion and produce a backing rhythm for your band, and you’re free to do that pretty much however you please. That’s not to say that you aren’t graded based on how you do, but you aren’t given a specific set of buttons to press or anything like that. The closest comparison would probably be something like PaRappa the Rapper, but even that game had guidelines instead of allowing you to freely improvise.

There’s light RPG elements and a full manga-style plot to enjoy, but the real heart of this game lies in drumming like Lars Ulrich. You drum by swinging the Joy-Cons! Swing them with gusto! Adjust the Joy-Con sensitivity so you don’t have to flail about like an idiot to do what you’re interested in doing! Swinging in a particular order or at particular times will result in “combos” that produce extra points. If this sounds kind of goofy and awkward, that’s because it is, but Gal Metal tries its level best to avoid sinking into motion control Hell. You can play with button and touch controls as well, but that feels like it’s missing the point somewhat, even if there’s something to be said for the fact that this game still works fairly well in handheld mode.

Given how this sort of gameplay is unique in the rhythm game sphere, it’s a little difficult to say whether or not it “works” outside of Gal Metal being a pretty good time. Grab a friend and trade off between sessions to really get the most out of it. There’s a bunch of songs to check out and the story ought to keep you going for long enough to satisfy before the improvisation conceit starts to get old.

As graphics and presentation go, well, it’s a rhythm game! You’re basically watching music videos and playing along for the most part, though the story segments are presented in an adorably endearing manga style. Gal Metal’s music, meanwhile, is to some extent up to you. If you flail around like a dying fish, then sure, this game’s not going to sound all that great. On the other hand, it’s possible to produce a pretty decent beat if you show some restraint.

So how did this experiment work out? Well, as mentioned, Gal Metal is actually a pretty good time! I’m not sure how high-level play in a system like this would work out, but as a casual game or something to play with friends, Gal Metal excels. Get some folks together, make absolutely sure you’ve got those wrist straps available so you don’t destroy anything, and get to drumming. 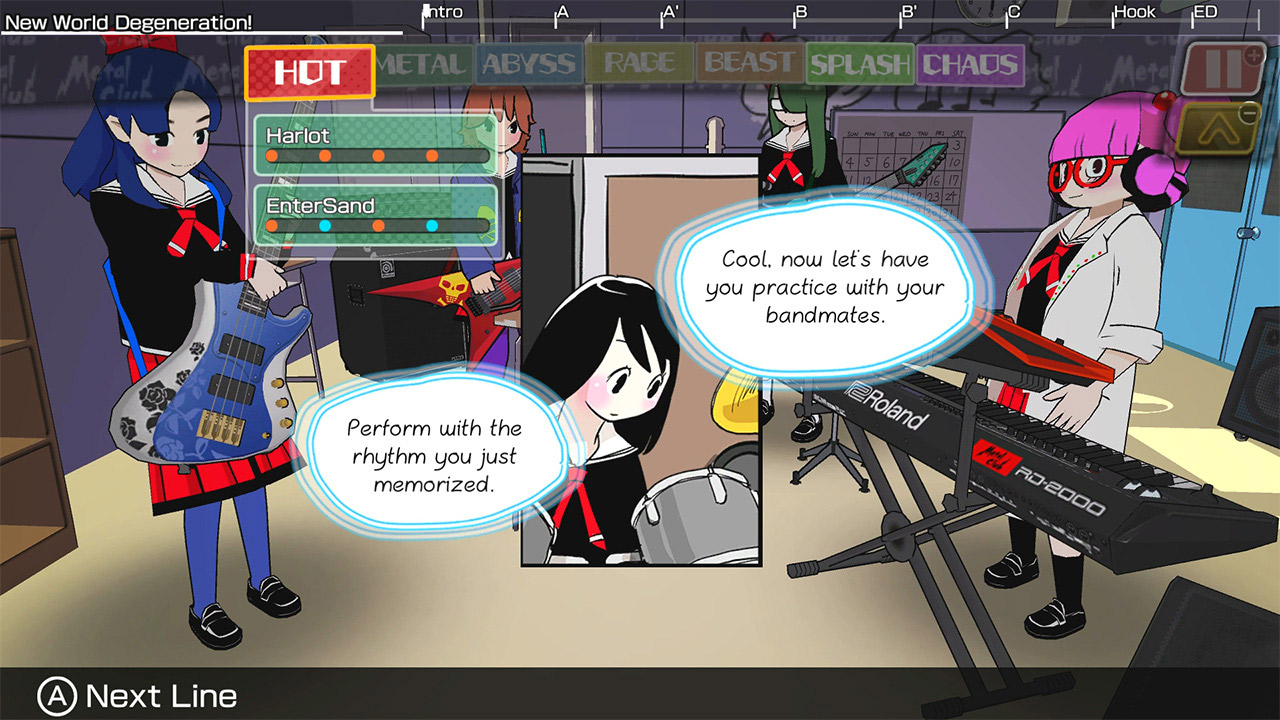