Arriving just in time for Halloween on the apropos launch date of Friday the 13th, Bethesda has a treat for those gamers who haven’t thrown their controllers against a wall in a good while: The Evil Within 2! Three years in development, the creator of the Resident Evil franchise returns with more of the same melodramatic storytelling and gore to give survival-horror hungry fans their dose of the heebie-jeebies. If you’re curious whether playing the original game is necessary to enjoy the sequel, it’s not.

In fact, going in blind might be the better option as any lingering feelings of déjà vu will come not from a relatively recent game, but the granddaddy of them all.

From hereon in, it’s best if we acknowledge that pretty much every character, locale, and setting are going to be stand-ins for characters, locales, and settings we’ve come to know and love from Resident Evil, right down to those delicious herbs. You’ll be hearing a lot about these comparisons in this, and any intellectually honest, review of The Evil Within 2. Developed by Tango Gameworks, the series is the brainchild of Shinji Mikami, who helped create not just the original Resident Evil, but the survival-horror genre itself.

After returning to effectively steady the ship and relaunch the franchise with Resident Evil 4, he left Capcom to develop other things. In 2014, after years of commercial disappointments, he returned to the genre with The Evil Within, a game that looked, played, and was, for all intents and purposes, Resident Evil. Given how terrible the last marquee game in Capcom’s franchise was, you’d see why fans would celebrate his return. Resident Evil 6 was such an atrocious miscalculation that served to highlight just how stale and repetitive its core mechanics had become. Comparatively, The Evil Within was manna from heaven. However, this year’s Resident Evil 7 Biohazard turned out to be shockingly good, which means the genre’s savior might now be looked on as the stale imitator this go-around.

There’s no getting around a basic fact: the story is awful. Then again, the story in the first game was also quite bad, as are most games in the genre, so we won’t hold it against The Evil Within 2. Things pick up fairly soon after the events of the first game with our milquetoast hero, Sebastian Castellanos, coming to grips with the loss of his beloved daughter, Lily. He soon learns that the villainous Mobius (re: Umbrella Corporation) has kept her alive, and that she’s inside the virtual reality world of STEM, effectively The Matrix by way of Inception. Seems that Lily is the “Core” of STEM, able to control everything and create the city of Union inside it.

Sebastian is coerced by Mobius to enter the virtual world of Raccoon Cit…er, Union, seemingly having learned nothing from his first experience fighting them. Union feels more like something we’d see in Silent Hill than a Resident Evil game, and that’s a good thing, as running from house to house (often from a bloody-thirsty monster mob) adds an element of actual survival that was often missing from the first game. It also lends a slight open-world experience as well, letting you explore side-quests and engage in non-linear fashion to find hidden goodies and other items that can be used to upgrade your weapons and stamina.

I hope you like hallways, because you’ll be scurrying through a whole bunch of them. Some are in tight, claustrophobic cabins, some in spooky mansions, while others are in strange, Escher-like dimensions that span time and space (but still hallways all the same). It’s a game that takes pleasure upending conventions in creative ways, playing off its virtual reality to always keep you guessing. It’s also surprisingly long, and smart enough to keep reinventing itself before the threat of exhaustion kicks in. The game’s second half completely upends the experience, throwing everything and anything in your path as combat and monster-mashing your way through are sure to send your anxiety levels to the danger zone.

As Sebastian progresses we begin to see Union literally rip itself apart, throwing perspective and reality into question. Apart from his sizable weapons cache, he’s equipped with a communicator, which lets him speak with found Mobius members, and even tune into ghostly frequencies (apparitions in STEM) to help solve mysterious and open up new challenges. Generally, missions are rather straightforward as the goal is often just to survive, employing your limited firepower in creative ways to take out endless hordes. If that doesn’t work, there’s always stealth kills. Or you die and trigger a gruesome animation. Most likely that last part will happen, again and again.

The most notable improvements over the first game are the more intuitive crafting system (naturally), which can be done on-demand in the field (indeed, even during the most anxiety-popping battles) or via workbenches. In the field crafting uses more resources, which are already scarce, adding some welcome strategic management between the splatter. The other is the enjoyable upgrade path via the notoriously ‘gross’ green glop you’ll collect from felled enemies. Tatiana Gutierrez, our favorite gothic nurse, returns to administer the brain-hacking from the safety of found wheelchairs.

Sebastian still handles like a tank in mud, and navigating him requires a ridiculous amount of controller-work, flipping between menus and other sub-menus so often you’ll think you were playing Final Fantasy. Factor in the questionable camera angles that swoop in whenever you engage in close combat and you’ll be fighting against the controls, racking up huge body counts (your own) due to sloppy mechanics with a game that simply isn’t polished. To its credit, at least the game ‘pauses’ whenever you bring up the menu system to assign weapons/items and craft ammunition. It’s not remotely ‘realistic’, but at least you won’t get your face stomped to gooey bits mixing those herbs and creating precious bullets.

I think it’s important to note that, while nostalgic throwbacks can be shameless good fun, we need to keep our expectations in check about what elements of ‘classic’ gameplay we’re jonesing for. See the recent Cuphead for a prime example of a new game appropriately honoring its rage-tastic past. To simply repeat what’s come before would be a gross miscalculation; nobody wants the bad stuff in the new stuff. So much of The Evil Within 2’s core mechanics feel like anachronisms I couldn’t help but wonder: are we really that nostalgic for bad game design?

Apart from the wonky controls, you’ll also battle with disorientation, especially when having to replay huge swaths of covered ground after one of the many, many cheap deaths. Thank the schizophrenic and counter-intuitive save mechanic for this, which feels like two entirely different systems stitched together. The game auto-saves at critical moments, but not necessarily during open-world ones, which is where you’ll spend a great chunk of your navigation and exploration. Having limited ammo means being creative with what you’ve got, which means taking chances. These moments can be thrilling and great fun, but having to retread monotonous busywork isn’t.

The other save system are manual saves via your communicator, a throwback to RE’s typewriter. These can introduce an element of strategy when navigating those off-the-path moments, but as they’re only in safe houses their purposes is questionable at best. I’m all for a challenging game, especially one that isn’t afraid to kill me for sheer stupidity (usually my own). You’ll spend a ridiculous amount of time running from mobs of baddies, scrounging for precious ammo and herbs, discovering hidden items and treasures along the way.

None of your discoveries are kept when you die, including any crafting, customization, improvements, or anything really. There are key moments when a chanced experiment (i.e. Hail Mary) at survival doesn’t work, sending you back to an auto-save spot when none of your preparation counts, meaning you’ll have to redo everywhere again. Often these moments require going ‘through the motions’, including traversing long hallways, killing the telegraphed jump-scare baddie, and other elements a smarter game would’ve accounted for. It’s like Groundhog Day, only sans Bill Murray’s loveable sarcasm. These things don’t make Evil Within 2 scary, but laborious. There’s a difference.

The Evil Within 2 is a survival-horror game, though what that means in today’s gaming landscape has changed considerably over the years. It’s more the former, less of the latter. That’s not to say the game isn’t “scary”, but it’s scary in that distinctively Japanese, late-90s sort of way where spooky children and grotesque, boil-laden Clive Barker knock-offs charge through doors, windows, or any available orifice to jump-scare (or jump-start) the action to life. How scary can a game actually be when character designs are so ridiculously camp and over-the-top?

The game looks about as good as you’d expect, though the dull, emotionless voice-acting may be the single scariest thing in the game. Man alive, if you’d have told me that, some twenty years on, I’d long for the innocence of the original Resident Evil’s hilariously bad dubbing (shout out to Barry, and his door-breakin’ skills)…Awful doesn’t describe the flat, meandering and toneless reading of the English-language cast here. I’m not expecting quality voices in a survival-horror game (or any game, honestly), but Sebastian, voiced by Marqus Bobesich, sounds like a cheap Batman imitation (or a cheap Will Arnett imitation, take your pick). Special kudos to Ying Sayun as the Kelly Hu-lookalike Yukiko Hoffman for having what is perhaps the single worst line-reading I’ve ever heard in any game, ever. And yes, that includes The Elebits.

If you can live with its most anachronistic shortcomings and don’t mind replaying large portions of areas over and over, The Evil Within 2 might be just the experience you’ve been waiting for. If you found Resident Evil 7 too forward-thinking for your tastes, take comfort in that The Evil Within 2 is here to offer the same gameplay mechanics and silly storytelling we’ve seen since Resident Evil 4, with a dash of the controller-throwing difficulty of the Dark Souls games. It’s not a combo everyone will enjoy, but if any of this sounds like your idea of a good time, Bethesda’s got your Halloween huckleberry. 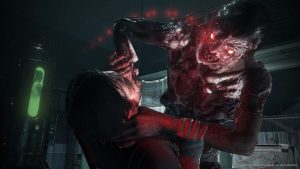 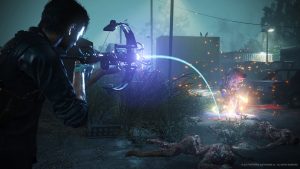 About the Author: Trent McGee

Popzara's reliable everyman editor who multitasks better than he monotasks, proudly - and blissfully - avoiding any and all social media as he lacks the extra brain cells to pay tribute.
Social:

The Lego Movie 2: The Second Part