Along with remasters and rereleases, collections have been big business these days. You’ve got collections including the Spyro games, the Crash Bandicoot games and all manner of other series if you want them. That’s good news for newer players and those who missed out on these games back when they were new. In some cases they even offer the chance to enjoy series that didn’t get a lot of attention in the west. Case in point: the Darius Cozmic Collection, consisting of the Arcade and Console collections as separate purchases, which offer a selection of side-scrolling shooter goodness on your modern console.

If you’re interested in shooters at all, you’re familiar with Darius. It’s a legendary shoot-’em-up series that’s even managed to get some headway in western territories with a couple of solid releases, such as 2015’s Dariusburst Chronicle Saviors. And before you ask, yes, it’s the one with the space fish. The real question about these collections, then, is how they compare to other recent retro archives. We’ve got the superlative Mega Man and X collections, the fantastic Castlevania and Contra collections and even a wonderful compilation of Samurai Shodown games. Each of these included high-quality bonus content and a solid selection of games for a reasonable price. Do the Darius collections offer the same?

Well, uh…not really. The elephant in the room here is the price. If you were to buy both collections at the moment, you’d be dropping $45 for the Arcade Collection and $60 for the Console Collection. Your $105 will net you…ten games, with several versions of individual titles in some cases. That’s not to say that the Darius games aren’t fantastic or that they’re not worth playing, because they really are great. The problem is that they’re relatively short games, there’s not much in the way of bonus content and they are, for some reason, split apart into two collections.

One $60 collection that included all these games would still be a tough sell, but splitting them between two top-shelf purchases just isn’t going to work. There’s also a physical International Collector’s Edition that includes all the content, but good luck finding that, much less affording it.

You’re also not really getting much of a collection when it comes to the Darius series. The Console Collection comes with Darius II, Sagaia (in two versions), Darius Twin (in two versions), Darius Force/Super Nova, Darius Alpha and Darius Plus. The Arcade Collection, meanwhile, has Darius (in three versions), Darius II, Sagaia (in two versions) and Darius Gaiden. The superlative G-Darius simply isn’t present, and while the excellent Dariusburst came to the west in 2015, it’s only available on the PS4, PS Vita and PC. Eventually, both of these titles will come to the Switch…and they’ll be a third purchase, Darius Cozmic Revelation. WARNING: Huge debts are approaching fast.

Not only are you splitting up your purchases three ways if you want the whole series, you aren’t getting much in the way of bonus content when you drop your massive chunk of money. The aforementioned Mega Man, Castlevania, Contra and (especially) Samurai Shodown collections were great because not only did they assemble these classic games, they did their part to help players understand why they were classic games. You had little game guides, inerviews with developers and even videos and replays to check out. The Darius collections, meanwhile, offer less content for your money and don’t seem to care all that much about the games they’re representing. If you didn’t know why Darius was such a beloved franchise with a worldwide fanbase, well…it’s kind of up to you to figure it out based on the content of the games.

Don’t get me wrong, they’re fantastic games, but a little more would be nice especially given the cost you’re paying. If you’re new to the franchise, Darius is an iconic series of side-scrolling shooters featuring giant enemy bosses themed after marine wildlife. American players are probably most familiar with the SNES version of Darius Twin, which was one of the earlier games released in that console’s life and which served as a great example of what the SNES could do. Japanese gamers, meanwhile, are likely to remember the absurd triple-screen arrangement used in the Darius arcade cabinets, making for an incredibly immersive experience as you found yourself surrounded by shooting action.

Either way, there’s little to complain about with the Darius titles as presented here, with both the Arcade and Console collections running, looking and playing wonderfully. For my money, the highlight of the collection as a whole is the aforementioned Darius Twin. There’s plenty of fond memories tied up in that game and the Collection reproduces them pretty much exactly. You’ve got save states, remappable controls, the ability to record replays and a number of screen customization and display options. It’s not hard to get these games looking and playing how you want; this collection does that, even if it doesn’t do much else.

That’s kind of what this comes down to, actually. If all you care about is the ability to load up one of these classic shooters and blast some intergalactic fish, the Darius Cozmic Collections allow you to do that. They expect you to pay a premium for the privilege and they don’t give you more than the bare minimum, but by God, you can play Darius on the go (on Switch, at least). In the modern environment where there’s both plenty of other things to do with your Switch and plenty of other ways to play Darius, though…it’s a little harder to justify the lack of content and the price of these collections. Even hardcore Darius fans will likely want to wait for a sale. 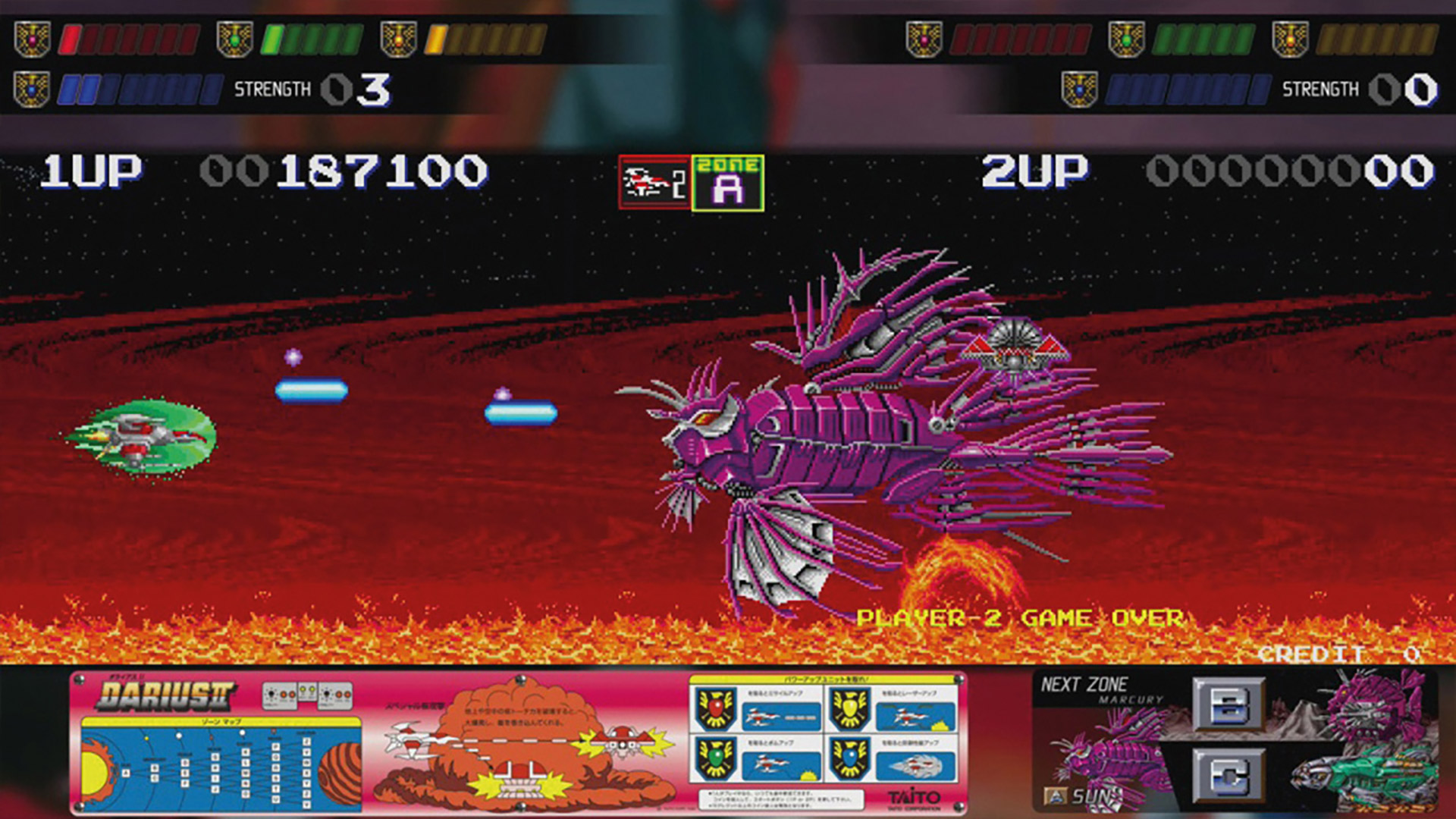 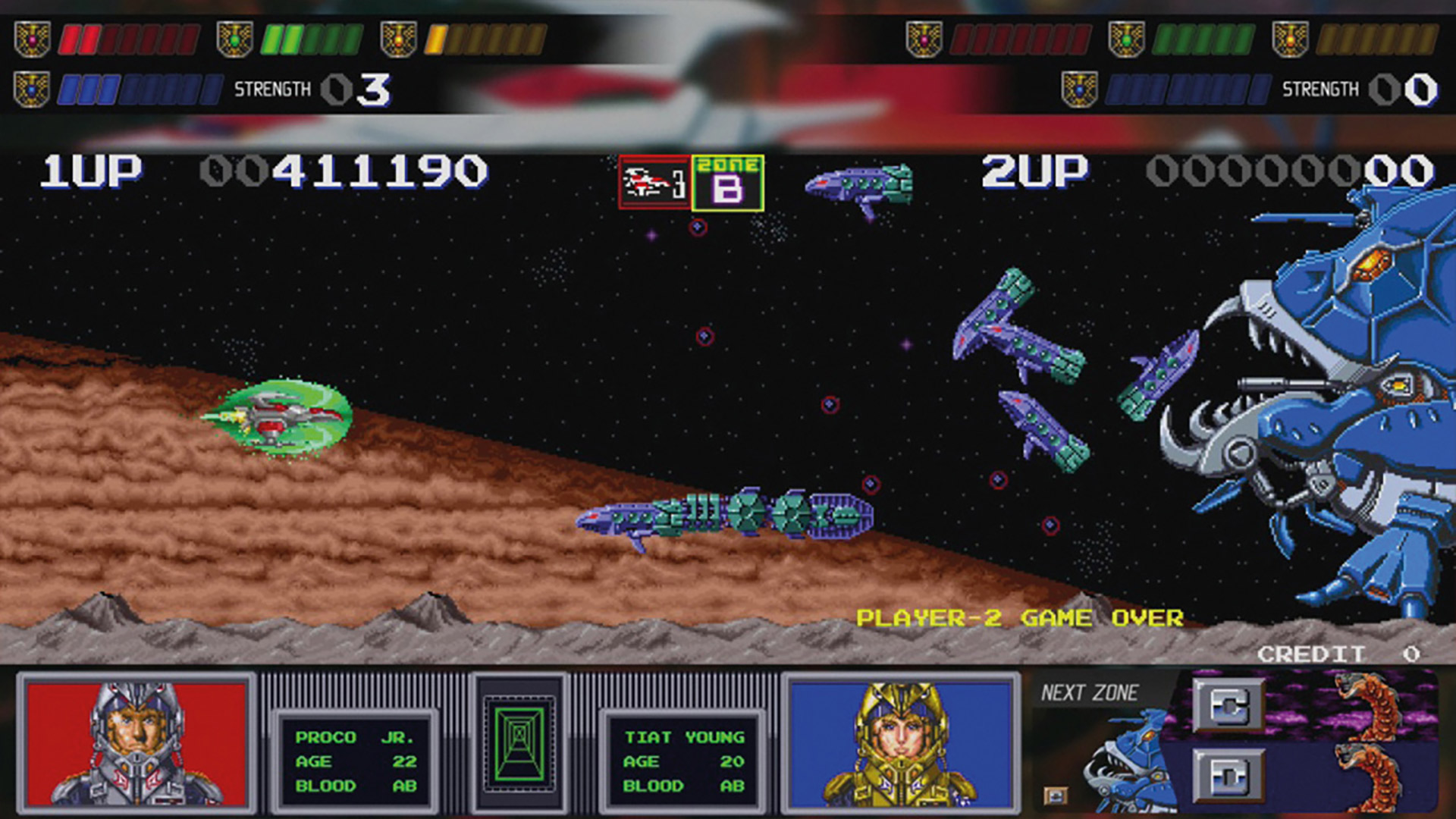 Journalist, writer, and gamer extraordinaire, Senior Games Editor Cory aims to be king of the universe and all he surveys. His credits include AOL, The Cumberland Times-News, and The Well-Read Mage.
Read posts by Cory Galliher
Follow the Author:

WitchSpring3 [Re:Fine] - The Story of Eirudy