Tell me if you’ve heard this one before: today we’re going to talk about an action-RPG with particularly notable difficulty where you’re intended to die a lot, gradually improving as you go and eventually earning that much-desired win. We’re talking about 2020 Game of the Year Hades, right? Nah, this is another game in the same vein – Dandy Ace, which is all about stage magic and the dangers thereof. It’s got spells, adventure, death and plenty of pink.

It’s tough being a magician these days! You’ve got people trying to debunk your spells, there’s a pandemic keeping people away from live events and, well, you might end up trapped in a cursed mirror. That’s what happened to Dandy Ace and his assistants when Ace’s rival Lele got sick of being second best. Ace will need to navigate the labyrinth within the mirror, battling baddies along the way, as he seeks a magical means of escape.

As a magician, Ace tends to let his spells do the talking. These are represented by magical cards. Each card has two sides, allowing it to be used as an active ability or as a modifier for one of your existing active abilities. For example, conjuring fireworks allows you to attack a large area and set enemies on fire, but you can also set the fireworks card as a modifier to another spell, lending the fire property to that spell.

This system is similar to Supergiant’s classic Transistor and it works just as well here. Coming up with creative ways to use your spells goes a long way toward making each run feel unique, allowing you to create stunning teleports, curse-inflicting bubbles and power-packed punches.

As a magician in a roguelite game, meanwhile, Ace also tends to collect all sorts of trinkets to enhance his abilities during each run. These tend to lack a little of the creative impact compared to the spells on offer, typically lending Ace percentage-based buffs to attack and defense, but the additional level of character customization is appreciated. Your stock of spells and trinkets is somewhat limited at first, but this collection will grow as you collect and spend mirror shards during each run. Newly unlocked goodies will remain available to appear in later runs, offering a sense of permanent progression.

While the concepts on offer are great, Dandy Ace’s gameplay can stumble a little at times. There’s a noted lack of impact on most of Ace’s spells, for instance. This is a pretty common issue in indie titles like this and it ends up making combat feel a little weak at times, akin to one of those Flash games from back in the day. Fortunately, upgrades eventually make you feel like the magical mastermind you really ought to be.

The only other real complaint is that the early parts of each run tend to be a little stale, especially given the dungeon’s tendency to fail to lock doors behind you as you proceed. It’s hard to feel challenged when you can merrily kite your foes forever, after all. Likewise, though, this is addressed as you proceed further, so it’s not the end of the world.

One thing that definitely doesn’t merit a complaint is Dandy Ace’s presentation. it’s…very, very pink. So pink. Eye-meltingly pink. That’s not a bad thing. Rather it means Dandy Ace is a unique-looking game that stands out amongst its roguelite brethren with a unique color scheme and dreamy setting. The closest comparison would probably be the stylish heists of Persona 5, which is high praise indeed.

It’s also hard to find fault with Dandy Ace’s sound, especially the villainous Lele’s incessant cackles and taunts. It all comes together to make for an experience that wouldn’t be out of place on a Saturday morning cartoon.

Taken together, the whole package of gameplay and presentation make Dandy Ace a must-play roguelite, especially if you love the color pink. While some of the earlier parts can be a drag, the rest of the experience is top-notch and there’s more than enough variety to keep you playing. It’s a tasty treat – you might even say it’s magically delicious. 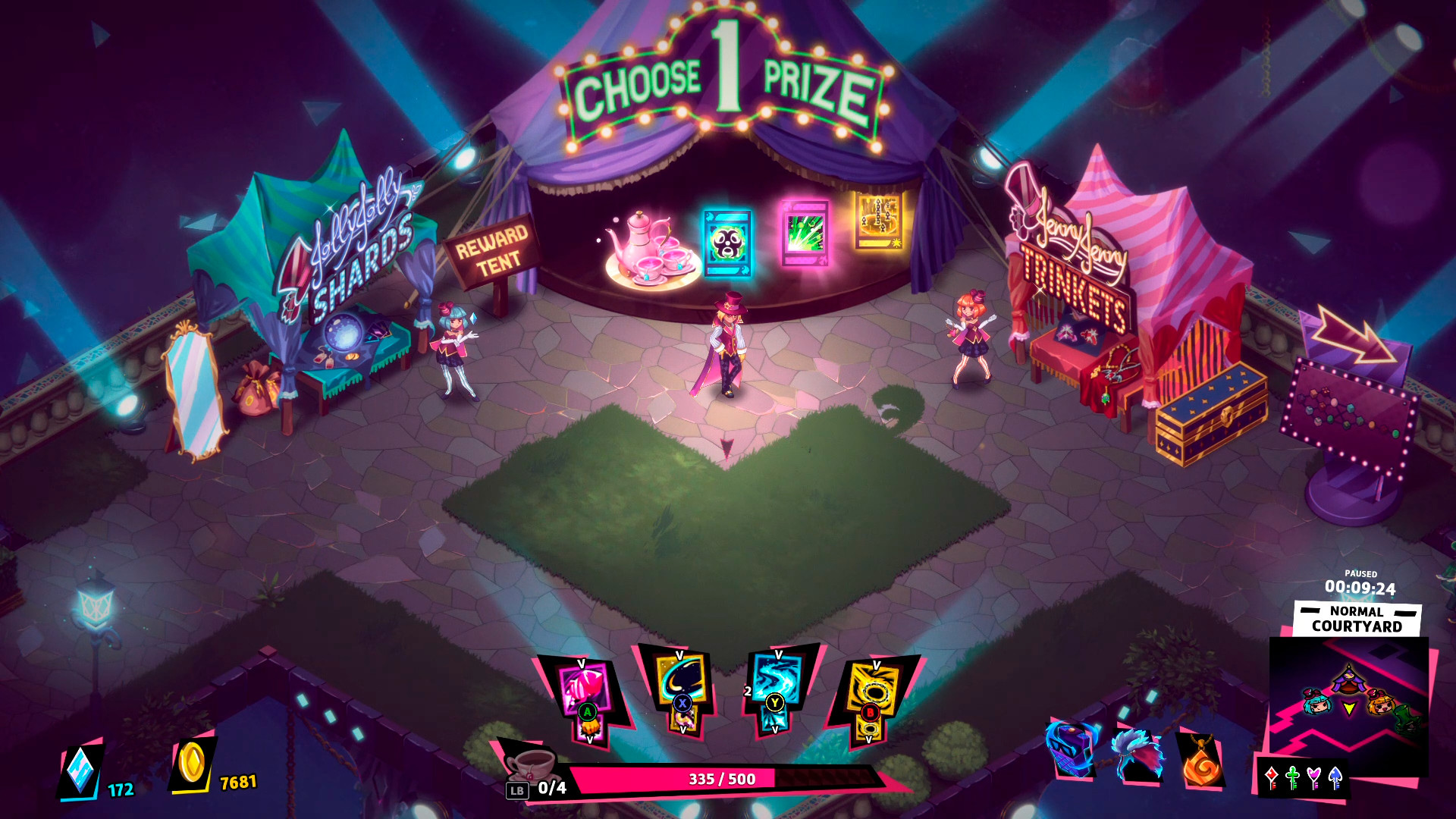