Five years after its release, Undertale still captures my thoughts. From its simple mechanic, depth of story, twists and turns, and commentary about gaming narratives and gamers themselves, it still holds a special place both in my heart and mind, the same as the original Super Mario Bros. and Shadow of the Colossus (my favorite game of all time). But thinking about the era that we live in, one thought has been rattling in my brain over the last couple of months. One of the key lessons in Undertale’s wide array of endings, a lesson that we understand in theory but can really grasp in the game’s mechanics, is there are some horrors for which there is no redemption.

By now, we know the core mechanics of the game – though beware of spoilers for those who don’t. You play as a young child trapped in the Underground, venturing through several areas meeting strange and interesting characters, each with their own quirks and personalities. Rather than a traditional adventure game where you would have to fight several monsters, gain experience points, and upgrade weapons to a more powerful warrior, you are encouraged to play this game without any kills. Rather, you conduct more passive “attacks” that are framed as defensive maneuvers, guiding a little red heart away from danger on-screen.

You learn more about these characters, and in the process, redeem their honor and bring them to the surface, where they establish a new society in the sunlight. 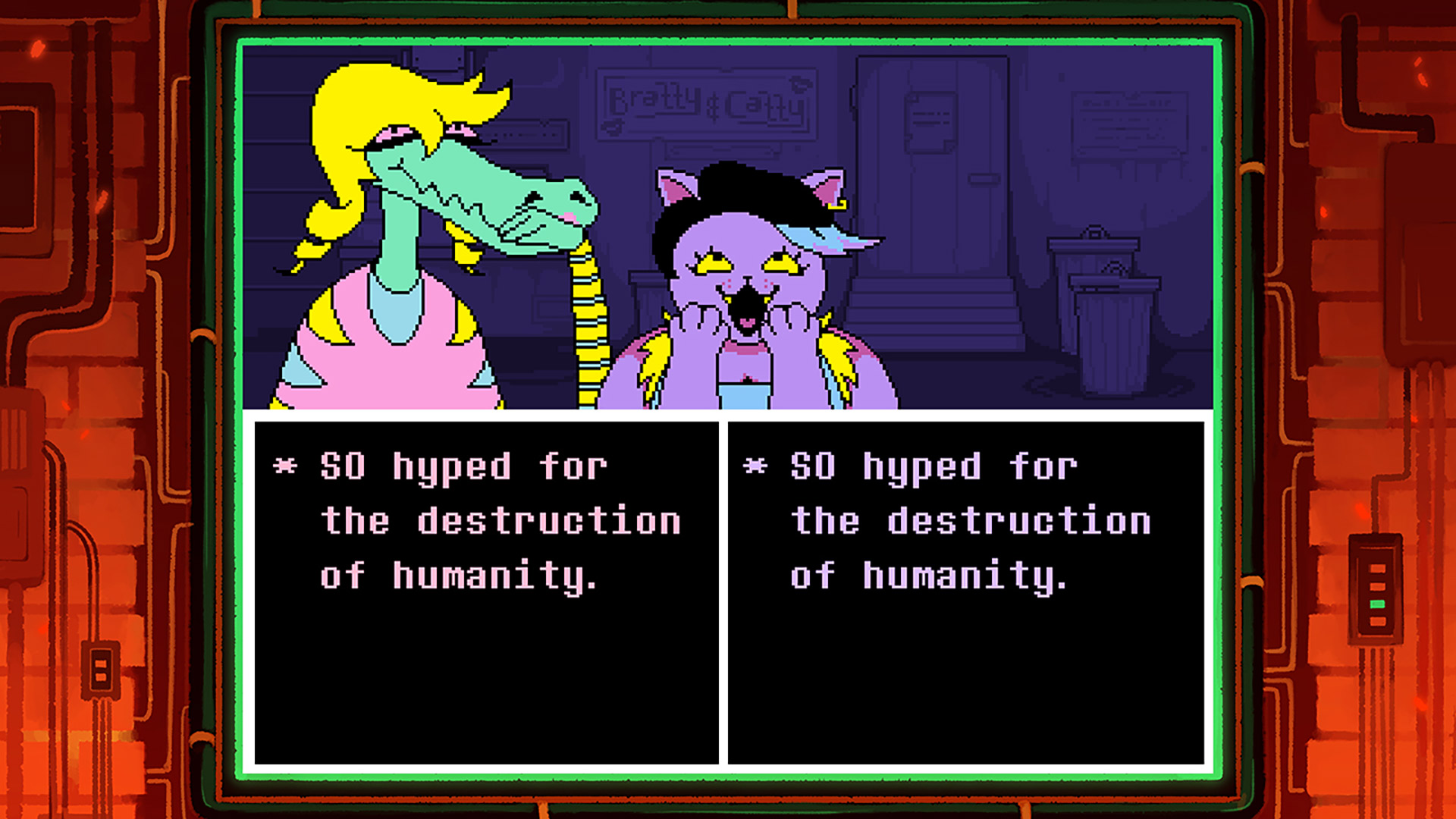 However, you still have the option to kill any character in the game, and those actions lead to a variety of multiple endings (known as “Neutral” endings), each with the character Sans giving you an update on how the Underground is managing with the loss, and ending the call asking you to never return.

This is true for all endings where you kill except for one – the ending in which you kill everyone, known as the “No Mercy” ending (or colloquially in certain circles as the “Genocide” ending). While the game provides the ability to play through with unbridled mayhem (not unlike other standard adventure games), this game is designed in every way to make sure that you always have an out, a way to pull yourself out of the depths of depravity before you are lost to the game forever.

I realized this on the last run that I played many years ago. I played through the game three times before. First, I had played as far as the battle with Toriel, where I ended up killing her. Realizing that I messed up, I restarted the game. On the second run, I avoided her attacks and spared her life, where I was treated to a spine-chilling admonishment from Flowey, letting me know that he knows what I did to her in the previous run, and that he would not forget (seriously, I got a tingle through my back when this happened). I finished the game and received one of the Neutral endings. I played it a third time, where I played as a pacifist again, and I learned more about the lore – the experimentation by Dr. Alphys and Asgore on the element “determination”, the subsequent creatures that were created, the origins of Flower, and the trials that Asriel faced to save the Underground. I felt satisfied with the story, but I realized that I only unlocked most of the story.

I started the game once again with the intention of playing a No Mercy run. I wanted to see how I could fare if I played through like most games I’d played before. Once I killed my first monster, the counter started, and the game told you how many monsters I needed to kill before moving to the next section. After fulfilling my bloodlust, I killed Papyrus, then Undyne. I found new weapons and armor to gain so that I could have higher stats for future battles. Although some bipedal monsters put up a slightly larger fight, battles were like slicing a hot knife through butter.

Then I got to Mettaton, and I was treated to some of the best use of subversion. Mettaton knew I was there to fight, and he transformed into Mettaton NEO, a brilliant-looking battle droid, complete with boss-battle wings, an arm cannon, and two-toned face tattoos. I was prepared for a more difficult battle, similar to the battle with Undyne, but with a single hit, Mettaton was defeated. I was confused, but I realized that this was alluded to in the Pacifist run with Dr. Alphys, that Mettaton’s earlier form was complete, but the true battle mode was incomplete. Mettaton NEO even says that Dr. Alphys should have worked on the defenses.

However, when I got to this battle, I was late in the attack, and I missed a direct hit. Mettaton NEO was destroyed, but he declared that I was not trying to kill the other humans or anyone else. This ended my No Mercy run. I was pretty frustrated, because I would need to play through several parts of the game again. Life took over, and I decided to put the game away. I have not tried the No Mercy run again.

I watched some other gameplay footage to see how others completed the game, and I saw the full story unfold. I also knew that once a No Mercy run was complete, the game file was permanently corrupted, and any ending on any subsequent run ended with Frisk and the glowing red eyes of an evil Chara buried inside. It’s a very tough trade-off – complete the full story of the game but corrupt your character in the process. Undertale does a great job of having the player feel for the characters in the game, with great writing and relatable motivations, so we as players don’t want to break that. I didn’t want to take the risk.

Then I thought about it a little more. This was the game doing its best to save my character file. Then I though about every time the game did its best to save me, to save my soul from my own bad decisions. With the power of determination, I can escape my fate at any point in the game. Every save point is a chance to restart anew. Every area, from the Ruins to Snowdin Village, from the Waterfall to Hotland, tells you how many more you have to kill, and you can simply not do that. You can just move on without killing the required number, which leaves at least one monster to take over leadership of the monsters. You can kill monsters and still spare the main characters. My fight with Mettaton NEO showed me that, even when the game tells you that you have to hit him, the game will pull you away from genocide if you don’t come with explicit murderous intent.

Even at the END of the game, there is a save point before you reach Sans. You can kill every single monster, and defeat every single main character with murderous intent, and you can opt out at the last minute before taking on Sans. If you take this last choice and complete a Pacifist run, Flowey chastises you at the end for not taking the No Mercy run to its completion. 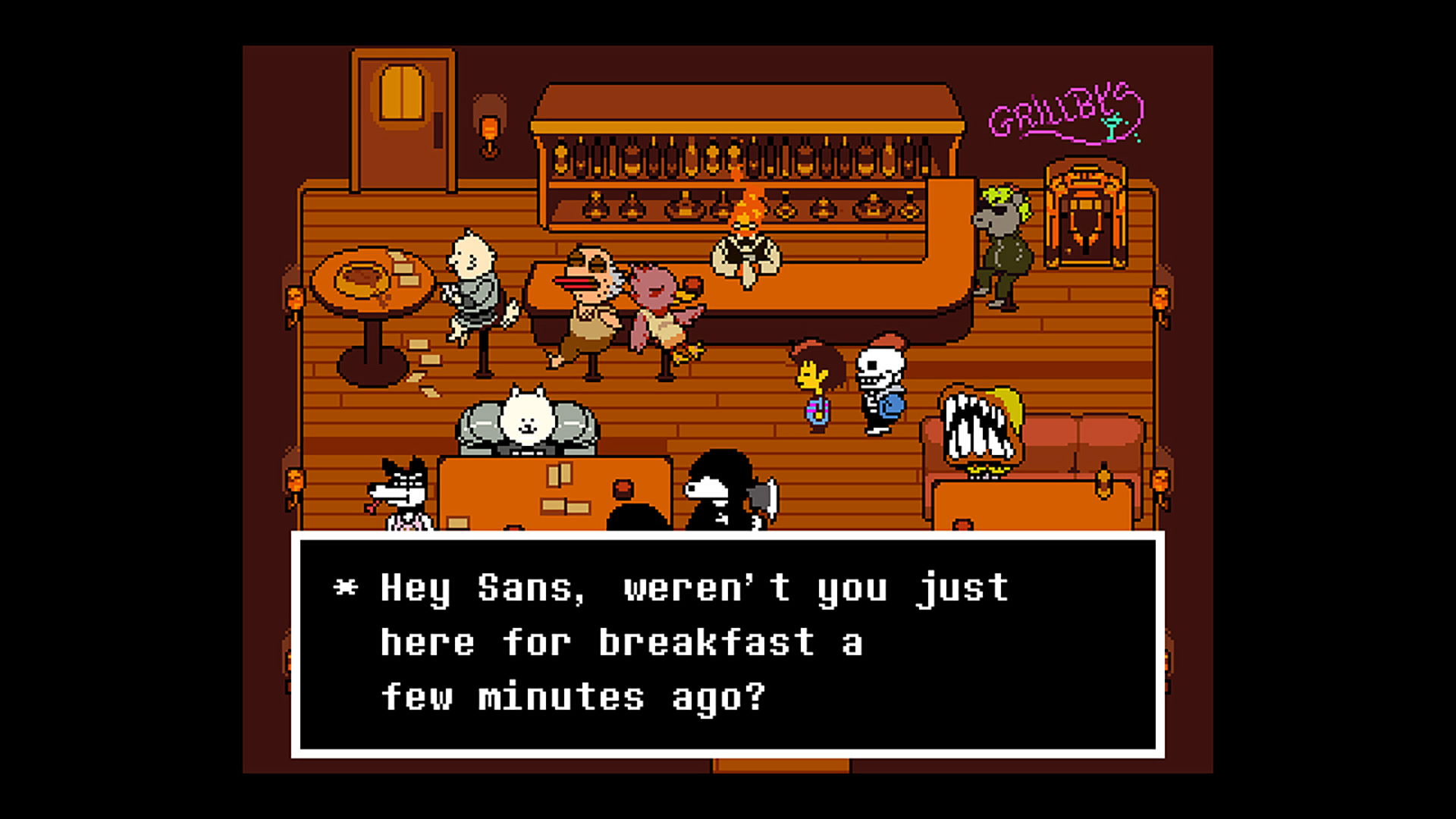 There are numerous ways that you can at least complete the game with a Neutral ending and save your character file, which means two things: there’s only one specific way that you can retrieve that ending, and that you have to be extremely “determined” to complete the game that way. You have to forego all of the wonderful writing, the quirky story, the chance to see the Temmie Village, and the lessons of working together in order to complete the game with No Mercy. It’s a hard, unsatisfying way to play the game, and I haven’t seen anyone that has completed a No Mercy run has felt all that fulfilled or enjoyed it.

I think about that setup more these days. I think about how we treat each other and what the world shows us is valuable and rewarded. Maybe it’s because I think more about the world that I’ve brought my son into, and how I want him to follow values or decency and integrity. I think about how I hope to instill those values and what I have to do to show those values in action. And then I think about Undertale for some reason, with its many endings and many chances to complete the story. I think about keeping him away from a No Mercy life, the winner-take-all sort of ideology that gives you power and status but leaves you isolated and uninteresting. It strips you away from vibrant colors and lively discussions, from meeting people that have different opinions or different interests. It takes you out of enjoying life when it gives you abundance and reduces everything to numbers on a page or on a screen.

It’s not a life that I would enjoy, nor one that I’d endorse to anyone in my one. But I also know that I and the ones in my life are subject to failure, to not living as our best selves.

Still, I want to teach my child that most things can be redeemed. I want my child to know that he will mess up, that he may fall prey to bitterness or jealousy, and he may act out against his classmates, or his cousins, or his friends. But he also needs to know that his actions (for the most part) can be redeemed. With the right amount of determination, he’ll be able to bounce back. I want those in my life to know that they don’t have to be defined by a single stupid action, but I want them to know that there are some actions that go too far, and those actions will always be with you. I guess it’s my job to be the game for him, to guide him and let him know that aggression isn’t always the answer. I want him to know that he doesn’t have to be cruel to win, just curious, patient, and filled with determination.

About the Author: Besu Tadesse

Besu writes features that help reconnect with his gaming roots, rediscovering what it means to love in the process. He also enjoys playing music and overthinking most things, like this bio.
Social:

Save me Mr Tako: Tasukete Tako-San

Shadow of the Colossus