There were plenty of AAA billion-dollar-budget titles on show at E3 2015, of course. You couldn’t really go anywhere without running into one. Heck, there were plenty of indie games, too! Try to climb up the stairs and chances are you’d trip and fall into a big, steaming puddle of Halo. Head down the walkway between halls and you’re taking your life into your own hands, since a big chunk of Batman might fall and crush you.

That’s dangerous. But no worries; as Popzara’s resident indie/niche gaming champion I’m especially equipped and ready to take on the risks so you don’t have to. Let’s go down a more safe route and talk about some of the lesser-known titles that may not burn up headlines like some of those bigger ones, yet still occupied a special place in my heart at E3 2015. Let’s get to it!

The Legend of Heroes: Trails of Cold Steel (XSEED)
This is, unfortunately, not the sequel to The Legend of Heroes: Trails in the Sky. I know, I was disappointed too, but apparently the second and third parts of that trilogy are still on their way. In any case, the disappointment was lessened a bit when I saw Trails of Cold Steel in action – it looks fantastic, even stacked up against some current-gen titles. This RPG offers a shift in perspective from Trails in the Sky as players control recruits from the military academy of .

Gotcha Racers (Natsume)
I don’t mind the odd racing game here and there, especially when there’s a unique gameplay mechanic to shake things up. In Gotcha Racers you obtain new cars using gachapon machines – y’know, those little capsule prize machines that are all the rage in Japan. I learned about that from Shenmue. Did you know Shenmue 3 was coming out? I heard Sony wants your Kickstarter money for that one. Er, right, Gotcha Racers. I played a bit and it feels pretty solid, but the real question is how the collection mechanic’s going to work out. The Natsume rep on hand said his boss had poured tens of hours into this one, so that’s probably a good sign.

Tales of Zestiria (Bandai Namco)
I’ve never met a Tales game I didn’t like. Well, except Tales of the Tempest, that one was kind of a stinker. Tales of Legendia wasn’t the best either. Still, the other five billion of these games have all been pretty good, and based on my hands-on time with Tales of Zestiria we’ll probably see another winner here. The combat system is reminiscent of the series’ most recent entries, Xillia and Xillia 2, and there seems to be a new focus on using magical abilities while exploring the field. Naturally, the graphics are also fantastic.

Rodea the Sky Soldier (Nippon Ichi Software America)
This is a gorgeous platformer focusing on aerial action and making weaker-stomached players motion sick. Play as Rodea, a mechanical soldier, as he battles his former army by flying around all over the place at illness-inducing speeds. Victory earns you coins that can be spent on various upgrades. At first glance, this title reminds me a little of the classic Jumping Flash series as it offers the same great sense of vertical motion that those games were known for.

Disgaea 5 (Nippon Ichi Software America)
Oh god those sprites! They’re so high-res! Dsgaea 5 follows a group of overlords as they battle the villainous , who’s done a variety of nasty things leading to each of them having a grudge. The series’ traditional mechanics are all present and accounted for, of course, and I doubt anything we see here is going to shake things up too much. If it’s not broke, don’t fix it, after all. One interesting note is that you can now throw diagonally without having to exploit a glitch to do it!

Guild of Dungeoneering (Versus Evil)
You’re the head of the titular guild and it’s your job to send erstwhile dungeoneers into dungeons, where they will likely get dungeon’d to death. This is a unique spin on the familiar concept, since aside from combat you don’t directly control your heroes. Instead, you build the dungeon around them and they handle exploration themselves, You’ll need to guide them in the directions you’d like them to take using gold coins as lures or scary monsters as deterrents. Combat, meanwhile, is a card-based affair where careful strategy will win the day. I’ve had some hands-on time to preview this one; it’s pretty brutal after the first hour or so. This is a smaller game, but the cute paper aesthetic and punishing difficulty should keep players interested.

Skyshine’s Bedlam (Versus Evil)
You’ve played FTL, right? Okay, that’s kind of what this is. You’ve got a convoy and you’re trying to make it across the wasteland without getting murdered or losing too many of your civilians. If you run into trouble, you’ll engage in tactical combat that plays out a bit like The Banner Saga. One odd point is that all your character sprites are based on Kickstarter backers. As you might imagine, there aren’t a lot of very good-looking characters available to choose from. Zing! Nah guys, I’m just fooling, donate to my Patreon.

As always, this isn’t an exhaustive list of niche games available at E3 2015. There were plenty more. SCADS more. And I’ll probably review them all, as is my way. I am free as a bird now and this bird you cannot change. By that I mean: stay tuned to Popzara for more even more gaming coverage, niche or otherwise! 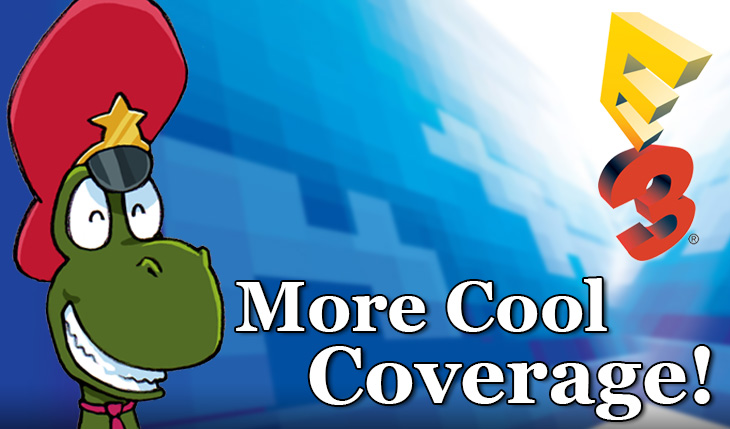 Nadia: The Secret of Blue Water – The Complete Series

Sakuna: Of Rice and Ruin